As an experiment, Artemis Games current project, Shards: Worldbuilding Zine, abandoned stretch goals and replaced them with a new way of expanding the project: Shared Rewards.

We’ve always had superbacker levels – those levels that cost many times more than the product but have something truly special like incorporating you into a piece of artwork in the final product, or having a meal with the creator – and sometimes they work, sometimes they don’t.

Shared Rewards are a different kind of superbacker level. They still allow the backer to gain something unique for themselves – in our case, incorporation of some form into the Zine – but they augment that with a communal bonus; a Shared Rewards backer adds not only to their own experience but to that of all the other backers.

We’re not yet sure if the experiment was a success, and whether a future project may combine both methods of expansion, but it has certainly had some interesting results. Our two highest shared reward levels, at £250 each, went in under 6 hours; and one of our lower, £75, levels has gone to someone who has stated unequivocally that the personal bonus doesn’t interest them – it’s purely the fact that they’re making the project better for everyone that makes it worthwhile.

If there’s one thing I can certainly say about the shared rewards experiment it’s this: It has made me smile to see people backing philanthropically – actively paying extra so that other people can enjoy the product more!

If you want to take a look at our implementation of Shared Rewards – or are intrigued by the idea of a Worldbuilding Zine, check it out on Kickstarter

Be Well, and Do Good 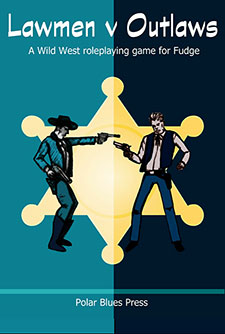 Lawmen v Outlaws is a simple Western themed roleplaying game about… erm… lawmen and outlaws. The game uses a variant of the Fudge roleplaying system, designed to be easy to learn and fast in play. New rules including the Minion Machine and Complex Tests will help you create interesting and varied challenges with little or no advance preparation. Adventure seeds for both lawmen and outlaws are also included. These things combined make Lawmen V Outlaw ideally suited for pick-up games.

Cyberblues City Deluxe is out! It is the same simple and fast, Fudge-based game but now with an whole new off-the-wall, London-based setting and so, so much new, full-colour artwork. And it is still absolutely free. Click on the link or image below to download.

And here is quick gallery of some on the new artwork.

The Cyborg Queen Victoria Perpetua waves to the crowds from Buckingham palace. 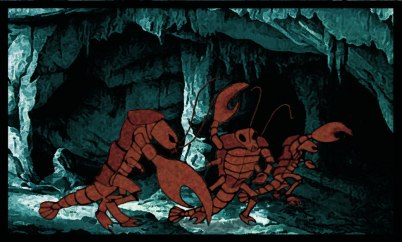 Lobster People on the prowl

It is customary at this time of year to reflect on the past year and look forward to the next. 2017 was pretty quite for Polar Blues Press, I just got a short new adventure out for Bounty Hunters of the Atomic Wastelands called The Ballad of Bad Bob McKlusky. But that doesn’t mean I wasn’t busy.

Over the course of the year I’ve been working on something called provisionally Cyberblues London. The blurb goes something like this:

It’s the future. The cyborg Queen Victoria Perpetua rules with an iron grip but her control is slipping over an increasingly divided and rebellious London. Crime is out of control, corporations act with impunity and the people rage against the Queen’s crippling taxes. London Bridge has fallen down. Large parts of London are flooded, the river Thames itself is now the setting for a three-way battle between Royal Navy, pirate crews and mutated river creatures.

But the tourists.. they still come in large numbers.

Cyberblues London started as a spin-off from Cyberblues City but it has grown in something bigger. I quite excited about it. The text is written, I am currently finishing the illustrations of which I’ve included a couple of examples below and I looking forward to sharing this with everyone in the first quarter of 2018.

Another possible candidate for 2018 is Fudgezilla (name to be confirmed). Fudgezilla would basically just be a lightweight, generic and  pre-configured adaptation of Fudge optimised for pick up and play sort of gaming. “Pre-configured” is the important word here. It would draw on Fudge implementation I used for from Cyberblues City.

I have mixed feeling about this project in that to some extent I am not sure about generic rules; the fun mechanics to creaete are usually those closely tied to the desired the setting, genre or tone. On the other hand I can see a use for it and it’s like I have it all in my head already, so I might just write a first draft and see how I feel about it afterwards. Should I choose to proceed I could be a reasonably quick job.

Incidentally, if the idea of a lightweight Fudge variant for pickup game is something you’re interested in you might want to keep tabs on the developments at the Fudge Gamer’s Blog https://fudgegamer.blogspot.co.uk/ .

Other than that, merry Christmas and happy New Year to everyone.

The adventure is presented in a non-linear fashion as a collection of Clues, Locations and Complications for the GM to assemble as he or she sees fit.

A collection of free games and adventures to download from Polar Blues Press. More product specific information can be found at https://ukrpdc.wordpress.com/category/polar-blues-press/.

>  Night of the Atomic Snowmen
> The Ballad of Bad Bob McKlusky 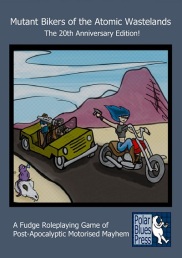 Annex is a free game that was play tested at London Indie Meet. The setting is based on the book Ancillary Justice and the mechanics are inspired by the Occupy movement’s hand signals. You can download it for free here.

You don’t need to be familiar with the book, although reading at least the first two chapters will help (they are available as a free sample from Amazon, the one on Orbit’s website is only one chapter which isn’t enough to be helpful).

Your group plays collectively as a single artificial intelligence that controls multiple Ancillary bodies. You, and at least 2 other players (preferably more), have been charged with bringing order to a recently conquered planet… spreading order and civilisation with military precision.

The AI hive mind is simulated in play by using hand gestures that maintain consensus within the group. These are similar to those used by many activist groups (originally Occupy) for meetings and were easy to transfer into an RPG.

After about 40 minutes of world building the game proceeds in a series of short stories, each around 40 minutes long until you want to stop. I takes at least 3 players but works better with more.

Feel free to comment with thoughts about the game, I’m especially interested in other ideas for using hand gestures in games.

Kevin looked at my work, an ashcan of a story game about Renaissance Game of Thrones, and then to me, his eyes sympathetic but unyielding.

“B-but, I need every part! Each rule is so beautiful!” I cried. How could he criticise my work so? How could he not appreciate the elegance of 15 interlocking mechanics and the resultant story they would no doubt produce?

“Looks like a mess, mate” he replied, placing a paternal hand upon my shoulder. “Like you vomited alphabet spaghetti on a Pollock painting”

END_OF_DOCUMENT_TOKEN_TO_BE_REPLACED

I’ve written a short series of RP poems based on the music of “Apple of my Eye”, and this is the second one.

It’s written as a script for one player to read out as you play. When you should stop reading and play through the next section of the game there will be a note (♩♪♫♬).

Ghosts of the Drowned [link]

You are the ‘Ghosts of the Drowned’, gathering by the town clock when the sun goes down and recounting your stories.

In turns, adopt the persona of a character and introduce yourself to the group, stating your name and a little about yourself (but do not mention your death).

Now anyone can ask questions about other characters lives, to be answered by that character’s player. Loaded questions are good (i.e. “what drove you to alcohol?” to which the answer shouldn’t be ‘I wasn’t’) and incorporating information from other character’s stories is also good. Continue for a few minutes until we know a little more about each character and everyone is happy to continue.

Next we explore each character’s’ untimely end. In the first scene someone should volunteer to play ‘Irony’… volunteer if you can think of an ironic way to end one of the other character’s lives by drowning, based on what you know of their life. Don’t say your idea, just volunteer and say which character it is.

Once we have a volunteer they frame a scene, saying where we are, who is there and what is going on. Stop before you narrate the first action.

The player whose character was selected plays that character, the volunteer plays the irony forces driving them to their doom and the other players are the rest of the world, taking turns to narrate the outcome of actions.

Narration alternates between Irony, narrating a problem for the character, the Character, narrating their attempt to solve it, and the World, who narrate the outcome.

The World should be cruel, a willing accomplice of Irony until such a point as they narrate the character drowning, at which point the scene ends.

We now need another volunteer, to play Misfortune, who will pick a second character to target. The second scene plays out as before but this time it is cruel bad luck that does for our victim.

The final scene is played out with a volunteer to take the role of Injustice, targeting a third character.

The game now ends. Any remaining characters were not ghosts at all but bystanders, who should consider the cautionary tales they have just heard.

I’ve written a short series of RP poems based on the music of “Apple of my Eye” and I thought I’d share the first one here (more will be posted over time).

It’s written as a script for one player to read out as you play. When you should stop reading and play through the next section of the game there will be a note (♩♪♫♬).

Props: A pen and a sheet of A5 each

Everyone take a sheet of paper and divide it into 3 roughly equal sections. In the top section write the name of a person, describe their life in a sentence and then what is troubling them. Keep this information secret.

Now pass your sheet to the right.

Read the sheet in front of you and in the second section, secretly write down what they wish for from the devil, keep it simple.

Fold over the top section of the sheet so it cannot be seen and pass it to right.

Read the wish on the sheet in front of you and write down the consequences in the third section. You are the devil for this section so be as cruel as possible.

Pass the sheet back to the original owner who should read the whole thing.

Finally, in turn, each player narrates a tale based on what is on their paper, fitting everything together and endeavoring to making the consequences more personal.

Each player should feel free to reconcile any inconsistencies between the first and last contribution and should try to keep their tale relatively brief.