Last Saturday I managed to make it to the London Indiemeet for the first time in 6 months and got to run a playtest of the Alternative Histories idea for a follow up to Intrepid.

I knocked together a map the night before based on the journey described in this reddit comment (and this map) which follows a 2nd century BCE Chinese explorer called Zhang Qian. Here is the map after the game… 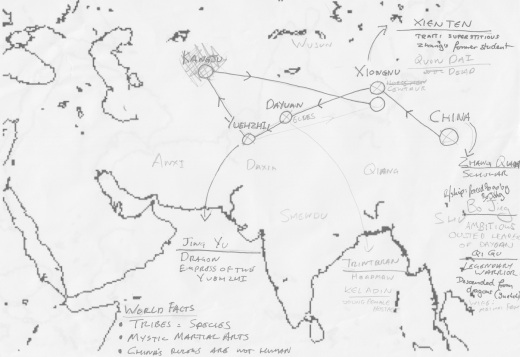 The game started with this introduction to the world:

“Under the reign of Emperor Wu of the Han Dynasty, c. 139 BCE an emissary named Zhang Qian was dispatched along with 99 men (including a non-Chinese guide) to penetrate the military blockade the Xiongnu Empire. The Emperor had sent him to find a long-lost kingdom called Yuezhi that had become nomadic wanderers after the Xiongnu had displaced them from their ancestral homeland, and convince them to aid the Han military in retaking the area.”

Upon which the players each added a function detail about the world (see World Facts on the map). Only one of the three facts really came into play in any significant way but I don’t think that hurt the game at all, they all helped set the tone.

We then also created 5 characters, giving them a name, trait and relationship… 3 from Zhang Qian’s expedition, one from the Xiongnu and the last form the Yuezhi. While creating these characters in advance felt important, a promise of what’s to come, the actual content (name/trait/relationship) felt a little weak, especially when I played Marquis of Ferrara in the next slot which comes with lots of excellent characters you can still make your own. Something needs to be done here.

The game then proceeded to play out 3 scenes at each stage of the journey (as you can see from the map I removed Kangju to improve the pacing) in a fairly standard pick a character, frame, free narration kind of way. Framing scenes did a lot to flesh out the locations on the journey, which was good and I hope to encourage.

Each scene ended when all players had put a card in the middle of the table, pick one at random to get a good/bad ending for the framing character. Kind of like a cross between Intrepid’s crossroads and Fiasco’s black/white dice. It was serviceable and introduced some reasonable twists into the story. I don’t know yet if I want to to be more or less.

All in all we got a decent story with some unexpected twists and interesting characters. The world building was a little shallow and I think the character setup wasn’t as robust as it could have been so I’ll need to work on those before the next playtest. I’ll probably stick with Zhang to see how different two playthroughs of the same scenario can be, but after that I think Napoleon’s march on Russia will be next.

I may have now played a game of it but it still doesn’t have a name (unsurprisingly).

Now that Intrepid is done and been on sale for about 3 weeks I feel like it is worthwhile looking back over how it all went, from start to finish, so this post is kind of long.

Intrepid started out being called Quest and it came as a direct result of me finally saying goodbye to GM’d games, including D&D. There have been plenty of games harking back to old school D&D but my ‘golden-era’ was in the 90s; when TSR were cranking out large elaborate campaign settings like Forgotten Realms, Dragonlance, Dark Sun and Planescape: adventuring was part heroic quest and part magical mystery tour.

END_OF_DOCUMENT_TOKEN_TO_BE_REPLACED

There doesn’t seem to be much advice — that’s discoverable advice from a few Google searches — on how to run a playtest of your shiny new RPG. As an outsider1 to this process, the prevailing attitudes seem to be

The first is good advice but rather broad, and the second stems to the same school-of-hard-knocks mentality that pervades some professions — that you do not learn your job from a book, you learn from doing, being knocked back a few times, and getting stronger. And I’ve been there and done that with a lot of things, both work-wise and hobby-wise, so I’m sympathetic to this view.

Still, it doesn’t hurt to organise my thoughts — and in doing so, maybe I can avoid at least some iterative navel-gazing that arises from the “just see what works” approach. So this post is about me thinking about what I want from the game in a fairly high-level conceptual sense, and how to gauge the response of the players.

END_OF_DOCUMENT_TOKEN_TO_BE_REPLACED

The new name for Quest – ‘Intrepid! A Storytelling Adventure’ – is now decided upon so I can get on with writing about it.

Intrepid took shape over 2 years of playtesting and iterating on the original idea. But once the rules were done and I’d stopped fiddling the real work on writing began. Along with Indie Pete as editor, I wrote down and developed a version of the rules that we were pretty happy with and at this time I ran one last playtest, not of the game mechanics but of the book itself…