Kevin looked at my work, an ashcan of a story game about Renaissance Game of Thrones, and then to me, his eyes sympathetic but unyielding.

“B-but, I need every part! Each rule is so beautiful!” I cried. How could he criticise my work so? How could he not appreciate the elegance of 15 interlocking mechanics and the resultant story they would no doubt produce?

“Looks like a mess, mate” he replied, placing a paternal hand upon my shoulder. “Like you vomited alphabet spaghetti on a Pollock painting”

END_OF_DOCUMENT_TOKEN_TO_BE_REPLACED

Epistolary Richard has some interesting thoughts about “railroading” right here, using Witch as an example of a game that railroads a game from start to finish, but, ya know, in a good way (Cheers! Richard!). Richard is obviously correct here, but I’d never thought about linking it to the concept of railroading.We should reclaim this word as our own!

END_OF_DOCUMENT_TOKEN_TO_BE_REPLACED 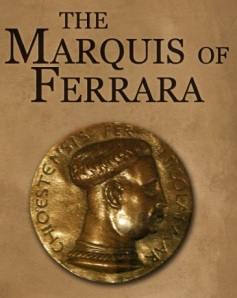 Following the success of Witch and a fantastic Indiecon, the Pompey Crew is finally ready to release our new game, the Marquis of Ferrara, for the benefit of all noble signori!

So, if your heart soars at the prospect of engaging in the passionate politics and murder of Renaissance Italy then grab the game here today!

In addition to the print copy, the electronic version contains both a PDF and an EPUB of the game, for eBook and tablet users!

Any comments or questions? Just throw up a comment! 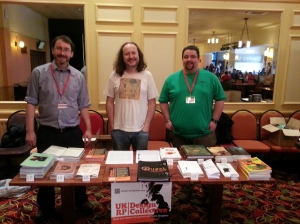 he UKRPDC stall at Indiecon!

From left to right we have:

+Tim Gray of Silver Branch Games, giving us his unique take on traditional fantasy with Jaws of the Six Serpents and Albion.

+Leo Marshall of indyhippo, bringing to us some cosmic frat boy partying in Sci-Fi Beta Kappa.

and of course, the inestimable +Ashley Griffiths of Damwain games, with uplifting games such as What You Wish For and Faed Away (all money from which was donated to Autistica). END_OF_DOCUMENT_TOKEN_TO_BE_REPLACED 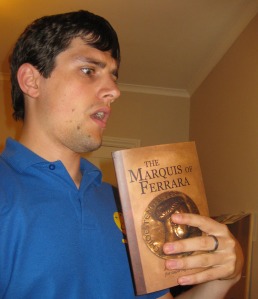 So I have the proof copy of the Marquis of Ferrara! Here it is!

But what is this?! Some white space down one side?! Uh oh! I forgot to send them a PDF of the cover with Bleed on it. While the book is A5, the cover is not the size of two A5 sheets! We need some extra space around the page to cover the size of the spine, and a little extra wiggle room for when it’s trimmed. This is about 10mm of white space, so a 6mm Bleed on the sides and 3mm on the top and bottom should cover it. END_OF_DOCUMENT_TOKEN_TO_BE_REPLACED

My name is Lorenzo d’Este. You killed my father. Prepare to die!

Pompey Crew Design‘s game of passion, politics and murder in early Renaissance Italy has been sent off to the printers!

Clicky here for more details about the game itself. 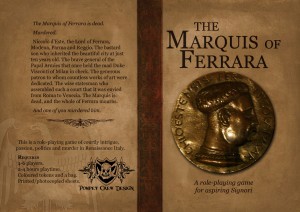 This is one of those games which has been in development for far too long. It originally started back in 2008 as a tactical duelling simulator for swashbuckling action, and then as I learned more about the era, I fell in love with the backstabbing and the drama. That whole duelling system has gone (even though it was amazing, and based on principles described in Fiore de’ Liberi’s medieval martial arts treatise ‘The Flower of Battle’, with attributes like… Actually, write me a comment or read here if you want all this), but hopefully that swashbuckling spirit is still there.

After some big shifts thanks to Indie Pete (Richard D. Evans) and Kevin Barthaud, I approached the idea from a more story game angle with ideas from Love in the Time of Seið and Mist Robed Gate. A couple of playtests and a whole lot of procrastinating later (during which time Witch was developed and released) and here we are.

END_OF_DOCUMENT_TOKEN_TO_BE_REPLACED

Play Pretend Job: Pompey Crew Design is myself and my bro-in-crime Kevin Barthaud, and we made Witch: The Road to Lindisfarne, a game about burning a young woman. And we’re currently working on The Marquis of Ferrara, a game about murder and courtly intrigue.